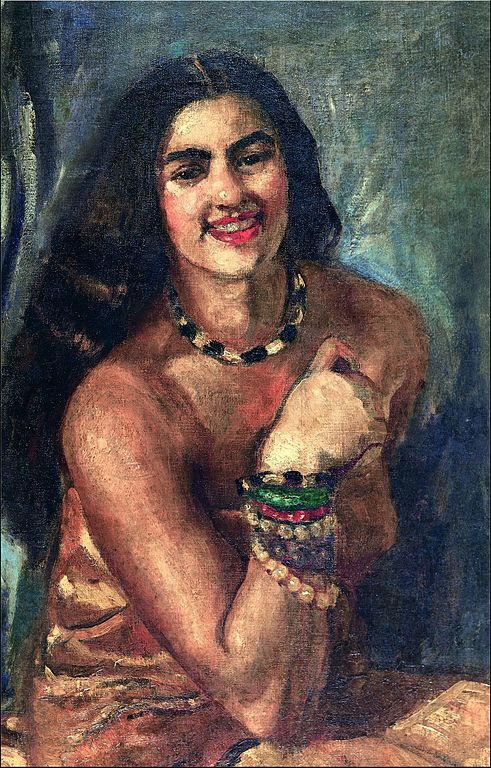 Can you guess who she is and why she is called Frida Khalo of India? I couldn’t have guessed it either until I got this project to work on and I did some research around her work and life as part of this project. She is Amrita Sher-Gil, an Indian Hungarian painter of the early 20th century drawn to painting from an early age. Be it their love for their respective cultures, or their expression of femineity and empowerment through their self-portraits, or be it their turbulent love life, there were so many similarities between both the artists that people started calling Amrita, Frida Khalo of India. But Amrita was a pioneering artist in her own right and I would simply prefer to refer to her as our own Amrita Sher-Gil.

When every other painter was painting a happy and content woman in bright red sarees, jewelry, gajra in her hair, smiling and giggling sitting with their friends, Amrita chose to actually show how a woman’s life looked like in that era. Waiting for love, acceptance, honor, finding a purpose and meaning. What particularly drew my attention was her choice of colors in her paintings and expressions on each figure’s face which depicted sadness, loneliness and hopelessness. I thought to myself why? Why are the women sad in her paintings? So, I looked for more details and I gradually started understanding her perspective. She just did not paint those women she was one of those women, who was looking for meaning, purpose and love. Amrita was the youngest as well as the only Asian artist to be elected as an associate of the Grand Salon in Paris. For her work, “Young Girls” she was awarded a gold medal in Paris, which was considered as the most prestigious award there. The works of Amrita Sher-Gil have been declared as National Art Treasures by the Government of India. Sher-Gil returned to India in mid 30s of the 20th century from Paris and travelled across India looking for a fresh perspective. It was at this time her way of seeing people and things around her changed radically. She looked at the Indian art traditions with a fresh eye as she gazed at the sad eyed people around her with empathy which changed her visual language. She was now more inclined towards warmer colors to depict her emotions and feelings. They became more saturated with intense Reds, browns, yellows and greens and her figuration expressed a new visual reality. 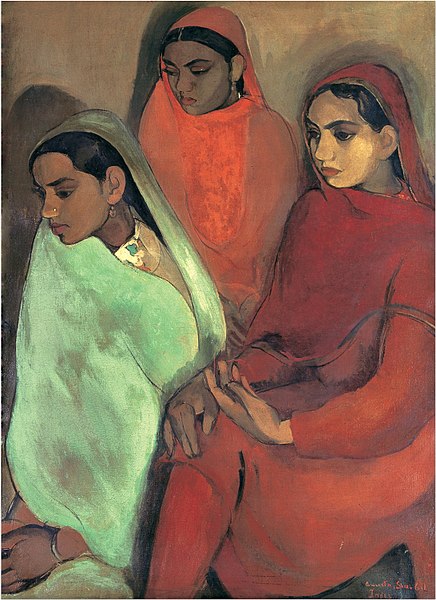 My personal favorite work of Sher-Gil is “Three girls” it was her first painting after returning to India in 1934. She has depicted how these girls have accepted their destiny by not resisting it through their expressions and the tone of colors in their dresses. This painting won her the Gold Medal at the annual exhibition of the Bombay Art Society.

We lost this brilliant painter at the age of 28 due to unknown reasons, when she was about to attend her first solo show in Lahore (Now in Pakistan). As someone rightly said, “Legacy is what lives on beyond us”. Sher-Gil’s work is her legacy and is housed in National Gallery of Modern Art, New Delhi and has influenced generations of Indian artists. I am now eagerly looking forward to visit New Delhi and witness all of her great work myself.

2. “This Is Why Late Artist Amrita Sher Gil Was Known As India's Frida Kahlo!”, Kishori Sud for Her Zindagi, Jan 2019

Note: Images of the paintings are from Wikimedia commons

Gifts of a Magician: Bamboo and Cane crafts of Nagaland