"Kind man to the kind,
Who's sweet to the sweet,
Very cruel to the cruel
He was nothing but God Vishnu in this regard”

These are the verses of the earliest available Kannada tripadi (three-line poem) found in Kappe Arabhatta stone record inscribed during the apogee of Chalukyas of Badami reign1. After the fall of the mighty Gupta empire in 6th century, the political and cultural void in South India was filled by the Chalukya dynasty. Around 543 CE, Pulakeshi I, whose family was probably a powerful vassal under Kadambas captured Vatapi (now Badami, quaint town in Bagalkot district of Karnataka), established a kingdom, which later would be known as ‘Chalukyas of Badami’ and heralded the beginning of golden age in history of Karnataka. The Chalukyan era lasted for about 600 years, ruled by three distinct but related Chalukya dynasties i.e. Chalukyas of Badami, Chalukyas of Kalyani (Western Chalukyas) and Chalukyas of Vengi (Eastern Chalukyas). Politically, Badami Chalukyas, first of the Chalukya kingdoms, had long standing rivalry with Pallavas of Kanchipuram, seeds of which were sown during the military campaign of Pulakeshi II 2, arguably the greatest of the Badami Chalukya emperors, who defeated King Harshavardhana of Vardhana dynasty. The Aihole inscription, written by Ravikirti, court poet of Pulakeshi II boasts of this victory as “harsha (happiness) of Harsha melted away by fear, his elephants fell in the battle3 “. The defeat under Pulakeshi II wasn’t overlooked by Pallava Narasimhavarman, who avenged the humiliation of his defeat in 642 CE by occupying Badami temporarily after vanquishing Pulakeshi II. Badami Chalukyas saw a brief decline after Pulakeshi II but was restored to glory by King Vikramaditya I who succeeded in subjugating Pallavas and restored order. His successors maintained stability in the kingdom which resulted in large scale temple building activity of unprecedented proportions around tripartite nexus of cities, Badami, the capital of the kingdom, Pattadakal (“place of coronation”) which was used for coronation rituals and Aihole or Aryapura, which was a major cultural centre. 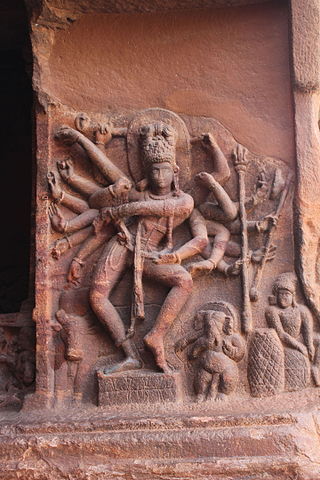 The capital city of Badami has a nexus of cave temples, along with temple monuments built in Nagara and Dravidian style, a fusion of North and South Indian temple architecture styles attributed to Badami Chalukyas.  There are four main cave temples, two of which are dedicated to Vishnu (Cave 2 and 3), Cave 1 is dedicated Shiva and Cave 4, smallest of the caves in the complex is dedicated to Jain tirthankaras. There are multiple accounts of Badami Chalukya rulers, many of whom were vaishnavites, being tolerant and benevolent towards beliefs other than their own4. Many kings commissioned Shaiva, Jain and Buddhist places of worship, which speaks volumes of their secularist outlook and acceptance of dharma. A magnificent Nataraja (“Dancing Shiva”) is at the entrance of Cave 1 with walls depicting Mithuna, Vidhyadhara couples, Harihara, Parvati, Ganesha and Kartikeya, family deity of Badami Chalukyas. Cave 2 has stories of Bhagavatam Purana, a huge fresco of Vishnu in Vamana and Varaha avatar adorning its walls. Cave 3, the oldest in the complex, primarily Vaishnava temple also hosts iconographies of Shiva, Brahma, Agni to name a few. The details of carvings in these caves provide evidence to the culture and clothing traditions of 6th century which are usually lost to historians. 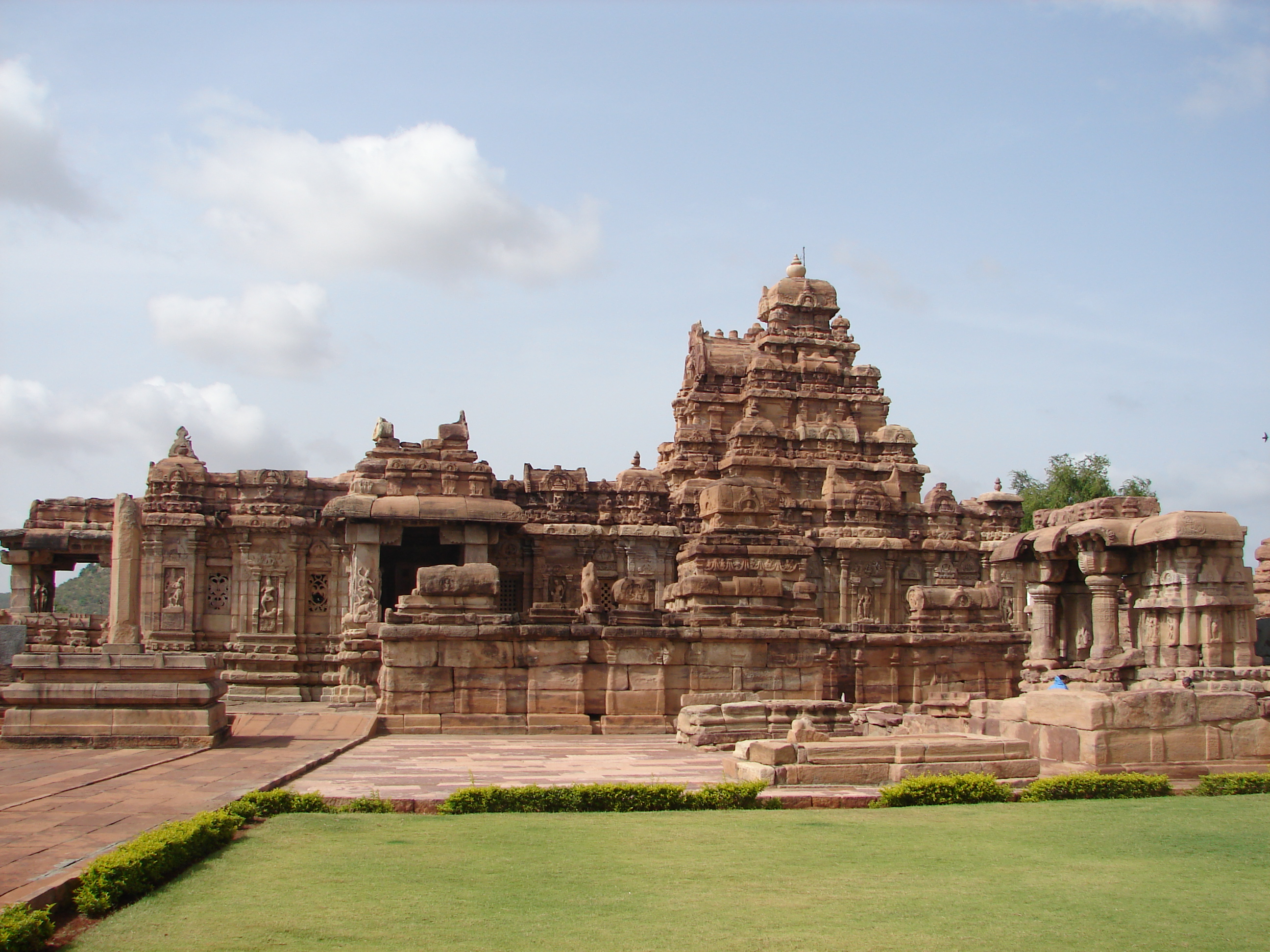 The political rivalry with the Pallavas of Kanchipuram seemed to have passed down the generations and victory over Pallavas celebrated with grand temples commissioned. Virupaksha temple of Pattadakal is an excellent example of this. This magnificent temple with beautiful decorative pillars, panels depicting Panchatantra stories, sanctum walls depicting scenes of Ramayana, Mahabharata, stories of Shaivism and Vaishnavism, is also known as “Sri Lokeshwara Mahashila Prasada” 5 honouring the queen Lokamahadevi who commissioned the temple. It was built in 8th century to commemorate victory of her husband, King Vikramaditya II over Pallavas. The queen, inspired by Kailasanatha Temple of Kanchipuram, is said to have specifically brought sculptors from the Pallava kingdom to build this architectural marvel5. The temple is filled with inscriptions, with rare instances of sculptors signing their names under their creations. One such inscription claims that the architect of the temple was given the title “Tribhuvanacharya”, master of three worlds6. It certainly seems like there were internal discords between the queens to build temples.  Mallikarjuna temple, which is almost like a twin of Virupaksha temple, originally called Trailokeshwara temple was commissioned by Queen Trailokya Mahadevi for the same purpose as Virupaksha temple. The temple, which stands beside Virupaksha temple is just as grand and as magnificent as its sister temple. 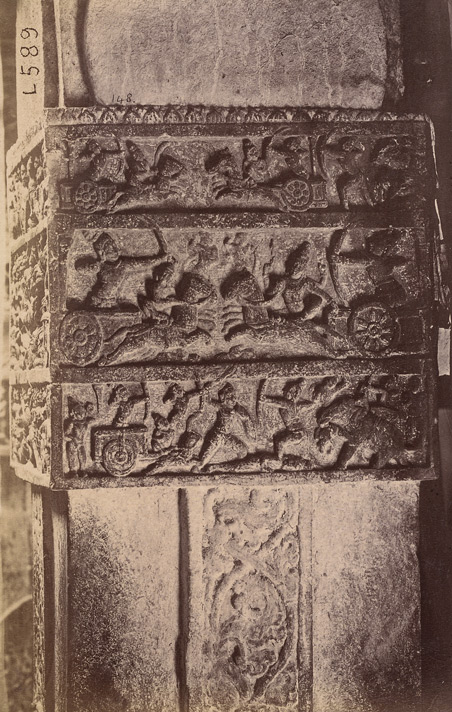 Bhagavad Gita narrative sculpture on a column in the Virupaksha Temple, Pattadakal

The grandest of the three cities has to be Aihole, mainly because it served as centre for experimentation in temple architecture enriching the tradition with 16 distinct types of standing temples designs7. Aihole boasts of many majestic monuments with over one hundred Hindu temples, a few Jain and Buddhist places of worship from 7th to 10th centuries. Although the Durga temple is the best-known temple, an interesting and often overlooked feature is hidden in the ceiling panel of Huchhapayya Gudi. The panel depicts Shiva in Uma-Maheshawara form, a venerated form in Shaiva tradition of Karnataka till date. The interesting feature of the panel is in its unusual depiction of Shiva holding a linga in his left hand, which is seen only in Badami Chalukya sculptures of Pattadakal. The depiction is unusual because there seems to be no specific mythical or textual support for this “linga-dhara” Shiva8, which has left this depiction for scholarly interpretations. The Chalukya period truly seemed like a prosperous golden era, with development of new temple architectural styles with benevolent commissions and protective overhand of tolerant ruling lords, who also oversaw the increasing traction of Vaishnava movement and its influence on religious and political landscape. The Chalukya kings also nurtured local Dravidian languages, along with Sanskrit which to till date maintain their influence over the region.